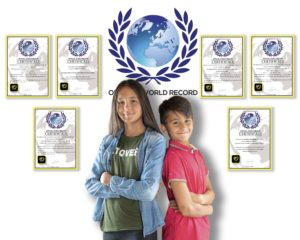 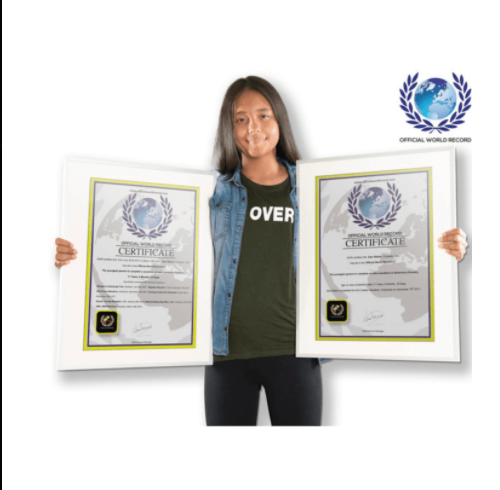 Canadian citizens Mekaal Rahim, 10 and Zara Rahim, 11 have broken 6 World Records in marathon running.On March 16th in Canberra, Australia, the siblings crossed the finish line to became the youngest male and female in the world to complete a full marathon on all 7 continents. The previous record for the youngest to complete a full marathon on each continent was held by two Americans (Blanca Ramirez & Nik Toocheck) who were both 12 years old when they completed the 7 continents. Zara managed to achieve the feat at the age of 11 while Mekaal was only a few months past his 10th birthday when he completed the journey. 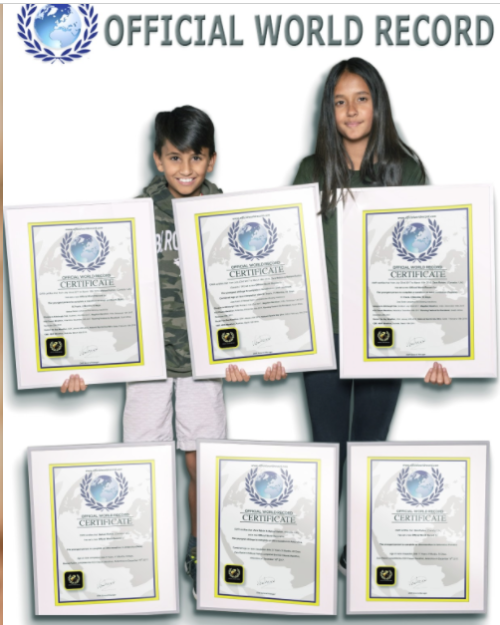 For Zara and Mekaal, the quest to glory started in July 2017 and came to an end 9 month later in Australia. During the course of this record-breaking feat, the siblings spent over 200 hours flying to race locations and covered almost 150,000 nautical miles.Getting to Australia for the last continent was a marathon in itself. Due to school commitments, the kids could only manage a weekend trip. After a 14-hour flight to Sydney followed by a 4-hour bus journey, the kids arrived at the start line jet-lagged and sleep deprived. However, they managed to find their form and completed a tough marathon in the AIS stadium which included 105 rounds around the 400m track. The event was part of the IAU 48 Hour World Championship which included a marathon distance as well.The Canadian-born siblings, students at Qatar Finland International School, planned the unthinkable after watching a documentary on Syrian refugees on their struggle to find safe haven. After months of training, they signed up for their first marathon in Scotland in July 2017 and the whole family completed it together.Throughout the fall season, both kids continued their training by taking part in Qatar Running Series events. They also joined TriClub Doha and H20 swimming club where they honed their swimming and cycling skills. 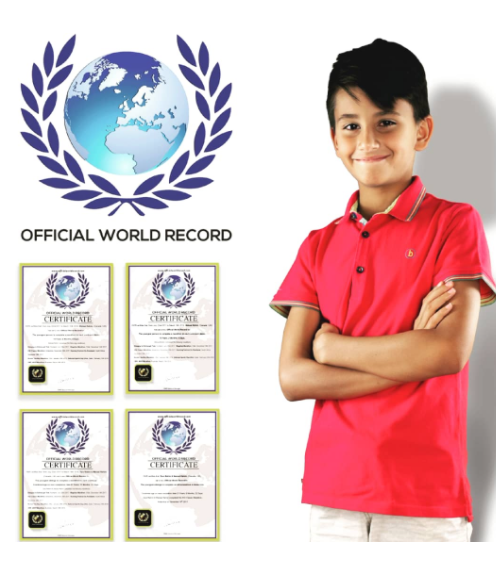 On 12th December 2017, the family took a 28-hour flight (including transits) to reach Punta Arenas; the southern tip of Chile. There, the runners were informed of inclement weather in Antarctica which caused flight delays. After 2 days of waiting around, the organizers decided to hold the Magellan Marathon, Chile to save time. The weather wasn’t that great in Chile too as the Patagonian wind was extremely strong and the kids found hard running on the Punta Arenas promenade along the Southern Ocean. However, they managed to complete the race to secure their 2nd continent finish after Europe.Two days later, the weather in Antarctica cooperated and the runners were flown in to King George Island on Saturday morning. With legs still heavy from running a full marathon two day earlier, the kids started the race 30 minutes after getting off the plane. The KGI Classic Marathon, Antarctica was tough as it took place in December which is the end of the spring season. So, within two days the kids ran 42km in grueling conditions on both continents. The underfoot conditions in Antarctica were extremely rough with snow, slush and gravel covering the course. The temp was about -10c (with wind-chill) which is about 40c colder than the temp is in where they live.Their 4th continent of the quest was Africa. Barely 4 days after coming back from South America, the family took a 9-hour flight to Johannesburg. This time it was just a weekend trip for an ultra-marathon in Pretoria. The event took place at an altitude of 6,000 ft above sea-level in a state park. Still sore from the marathons in Antarctica and South America, the siblings completed the 42.2km race to record their 3rd marathon finish in 3 continents within 14 days.Los Angeles, USA was chosen as their 5th continent marathon which was planned during the school mid-term break. It was again a 16 hour flight from Doha to Los Angeles but this time it was a one week trip which included plenty of sightseeing and relaxation. 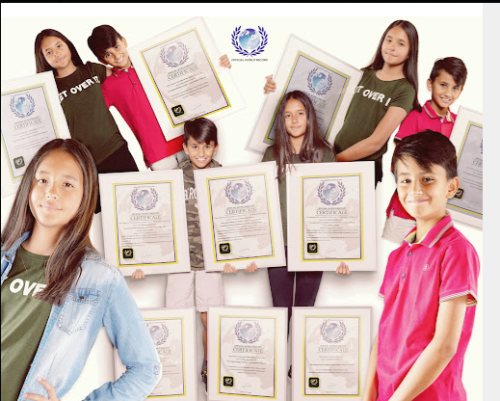 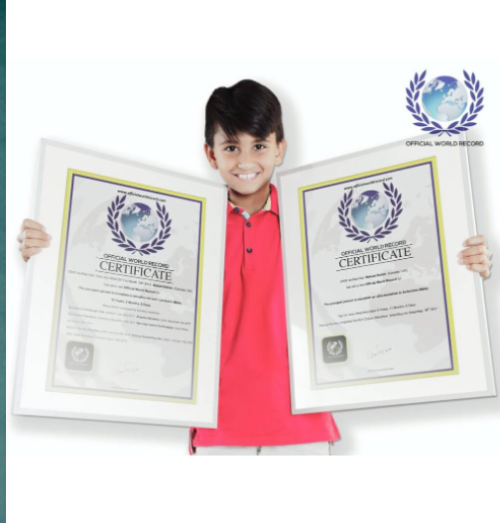 Zara and Mekaal are global travellers and have so far travelled to 64 countries on all 7 continents. Their love for running came from watching their parents take part in long-distance events all over the world. Their mother, Nadia Rahim, started the Qatar Running Series back in 2015. It is the only community-based running series in the country which attracts hundreds of runners ranging from juniors to adults. She also owns Playball Doha, a sports and movement program for kids.Their father, Ziyad Rahim, holds 10 Guinness World Records in long-distance running; something both kids aspire to break when they grow up. Both Zara and Mekaal are fluent in English and French and are conversational in Arabic and Urdu.The quest for 7 continents started after both kids watched a documentary on Syrian refugees on their struggle to find safe haven.Zara added, “I was so sad to see young kids walking hundreds of miles with their parents from one country to another. They did not have warm clothes or proper shoes, but still they were determined and motivated to reach their destination. I wanted to experience the pain they were going through, so I asked my parents if Mekaal and I can run a marathon”.Ziyad explained that the kids had to go through strenuous training for the race. “I had to ensure that they were fit enough for the challenge. A few months before, they both had completed a half marathon in Barbados, including multi-day 10K races. However, the jump from 21K to 42K is huge so I had to train them to be mentally strong for the challenge. They are fast runners as they usually run a 5K in 23 minutes and a 10K in under one hour. I told them that they need to walk and run and conserve energy or they will not be able to succeed. We enrolled them in a swimming camp to improve their cardiovascular and had them thoroughly checked by doctors. 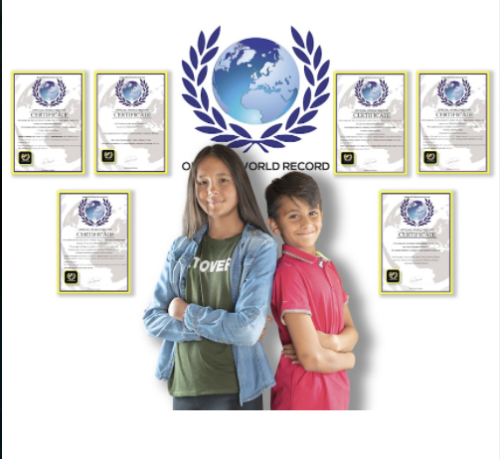 Once my wife and I were convinced, we signed them up for the marathon”.“Whenever I was cold and tired, I kept thinking how those Syrian kids managed to travel those long distances. I was exhausted but I kept going and my parents helped me a lot. It was a great feeling when my brother and I finished the race together”, Zara explained how she felt while running in Antarctica.Their parents were extremely vigilant throughout the race in Antarctica. “I kept checking their heart rate and body temperature and made sure they were well hydrated. We even took a 15-minute break and took them inside the base for hot chocolate and soup. We had doctors on board too, so we knew they were in safe hands. I think my wife and I were more tired after the race as we kept monitoring them throughout rather than concentrating on our own race”, Ziyad added.In the end, both completed the race with a big smile. The next day, they woke up fresh and did all the excursions by visiting penguin and elephant seal colonies and even played ping pong with the Russian scientists at the base.Mekaal explained how amazing the Antarctic trip was: “I spoke with a scientist who studied glaciers and he told me about climate change. I also ran beside penguins and took pictures with them. They are cute but their colonies smell bad”.Their mother was elated: “I am so proud of Zara and Mekaal. Running a marathon is tough physically as well as mentally, and they powered on through. At times you feel like you want to quit but they kept on going. They are an inspiration to me and I am amazed at their determination” said Nadia Rahim.