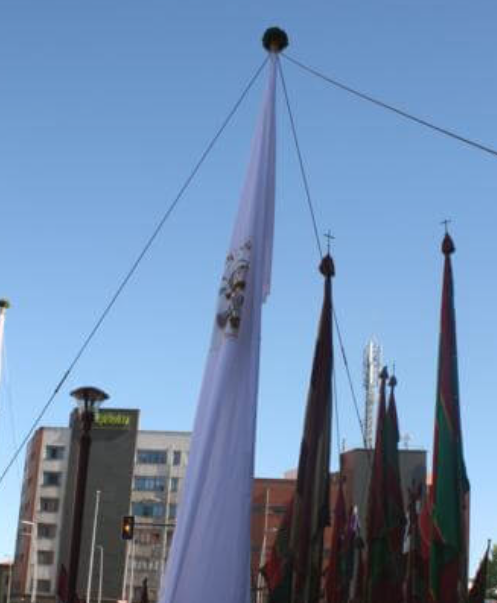 The record was carried out on a Tuesday afternoon; this enlarged the difficulty of the achievement since most of the people were working at that time. Besides the banners (similar traditional elements to the flags and characteristic of the towns from Leon), as well as the people that carried them, do not reside in León capital, place in which the record attempt was brought about. Some of these people had to drive over 100 km to be able to participate in the record. Even that, various Banners of the northern part of the province of Zamora also participated, the same as the Banner of the Banners the Kingdom of León Association, and the three Real Banners (Real Banner of the Council of León, Banner of the Province of León and Real Banner of Baeza-Miraculous Banner of San Isidoro).The banners paraded from two different points of the city, which remained paralyzed by slightly more than an hour, thanks to it was July, the chaos was not excessive. The Banners paraded from those two points already commented, to join and meet at the San Isidoro square, where were measured by the notary who gave faith of the height of it. Among the people who was parading with the Banners (each banner needs among four and ten people to carry out a travelled distance as the one that was carried out, since each of them weighs around twenty and sixty kilograms, depending on its the height) and the people that attended the event, the San Isidoro square got completely packed tight.The record coincided with the presence of the route Quetzal boys in León, who witnessed the record in the square. It was not too much easy to make the banners enter into the square, since the square is not especially large; furthermore the affluence of people was massive. For more than six minutes, the “Dulzaineros” , first interpreting the Banners hymn and subsequently the León hymn, prolonging it time in order to exceed the six minutes. Once they managed to exceed the record, the Banners collected their banners and proceeded, as being usual in the meetings of banners, to share an afternoon snack of pickling, bread and wine.

The event took part in León, a city in the north of Spain , on a Tuesday afternoon . People wearing national costumes , marched , danced , sang songs and played instruments in the streets of León . Banners of different colours were held from two different points of the city and joined in San Isidoro Square .Each banner needed between four and ten people to be carried .It was an awesome event if we take into consideration the beauty of the national costumes , the differently coloured banners and the record achieved.

Compilation of press release news about this world record on several media channels.