The oldest church in the world that remains submerged in water

Official World Record certifies that the Church of Sant Romà de Sau is the oldest in the world that remains submerged in water.

One year ago, OWR began a periodical investigation to include new cultural records on highlights from around the world.

The research on the Church of Sant Romà de Sau was carried out with the collaboration of the DIDPATRI Research Group (Didactics of Heritage) of the University of Barcelona. 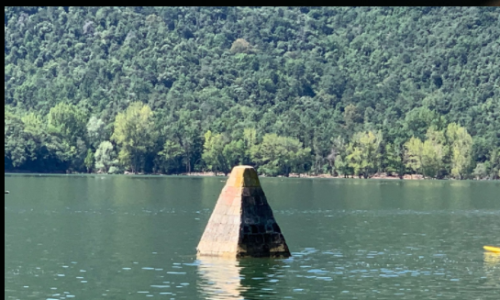 Research confirms that the Church of Sant Romà de Sau is the oldest in the world submerged in water and that it stands upright. It dates from 1061 and is in the Lombard Romanesque style. The old town of Sau originated around the year 917, and the parish church was consecrated in 1062. 900 years later, in 1962, the swamp was built and was expected to cover the town, which was moved to Vilanova de Sau.

Therefore, the church has been submerged for more than 50 years, and has always been a pole of tourist and cultural attraction in the area, and an attraction for several curious people who approach it on foot in times of drought or through aquatic media when it is most covered. 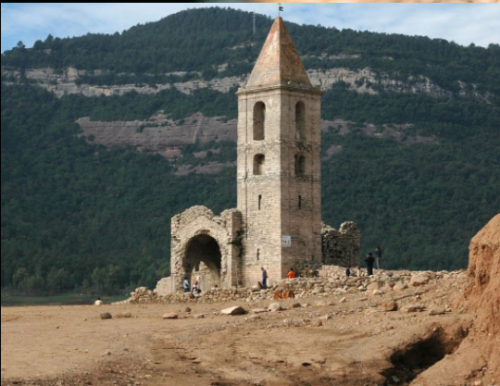 Its iconic bell tower, which is not overshadowed by the waters, has become a symbol of Catalonia.

In addition, during the search with our team of divers we found the cross of the bell tower that was torn and thrown at the bottom of the swamp and that has been restored.

The team of divers had to dive more than 23 meters in order to check that most of the church is well preserved at the foundation level, underwater, and with a percentage large enough to consider that it is it stands upright and can be considered a church.

It was also the first time we knew that an underwater church was filmed for a study of this nature. 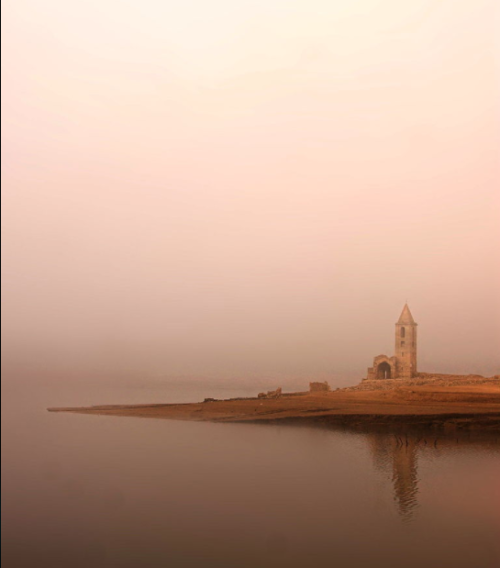 Parish church oriented from east to west. It is half-ruined and it becomes difficult to distinguish the body of the early church from the later buildings attached to it.

It has a single nave, currently without an apse and with a large arch at noon.

On the north side there is a slender three-storey bell tower, on the second there are twin windows with a smooth capital and Lombard arches and serrated teeth on top, the windows on the third have a semicircular arch and it is covered on four sides.

On the north wall there are Lombard arches on which the construction apparatus changes, which up to that point was made of well-carved stone and then made of river pebbles. To the west is a square, walled window.

The vault is terrified. Historical news Old parish church of Sant Romà de Sau, under the cliffs of Tavertet and near the modern nautical club. Since the construction of the Sau reservoir in the 1960s it has remained undermined under water, but in times of drought it comes to the surface.

It was badly affected by the earthquake of the 15th century and was later reformed and enlarged, as can be seen by the difference in construction apparatus. It is built of stone and, despite the hardships that pass under the water, you can still admire the architectural beauty and solidity of its materials.