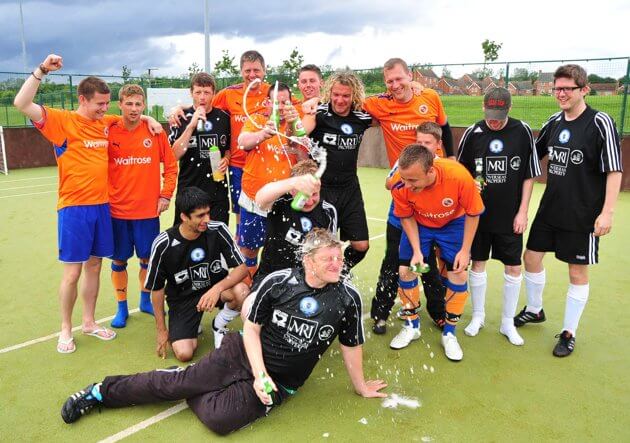 A group of footballers have broken the record for the world’s longest match after playing for 52 hours and scoring an incredible 1,700 goals.The teams, representing Peterborough and Reading, kicked-off shortly after 10am on Friday and did not finish until 2pm on Sunday.

They smashed the previous world record for the longest match, set by the same players this time last year, by 10 hours. Reading won the game, in aid of charity Free Kicks Foundation, after scoring 895 goals to Peterborough’s 808.

The two teams each had eight players playing on a rotation system, which meant they could only snatch a few hourssleep through the night.Organiser Conor King said: “We are all a bit tired and a bit relieved to have finished but also proud.

Longest football match Celebrations at the end of the world record five aside football attempt by members of the Free Kicks Foundation … “We were really tired through the night and were struggling a bit. We had to slow the pace right down this morning but for the last hour we were all really going for it. “Our legs are all in pieces. I looked around afterwards and everyone was really struggling to walk.

The rules state that the five-a-side match must be played between just two teams, each with a maximum of eight players per squad. Professional physiotherapists from Peterborough United were at the Longest football match, 52 hours This was the scene after 22 hours into the world record attempt as player Rob McGowan takes a well-earned rest …mammoth match to help give the players some help keeping their muscles loose with massages.

United’s captain Gaby Zakuani was called in at about 1am on Saturday morning to cheer the lads on, and help keep morale high. The event was in aid of Free Kicks Foundation, a charity aims to give ill, bereaved and disadvantaged children football related opportunities.

Last year the group raised a huge £2,500, but they say they are confident of beating their fundraising record.